A Chat with the ASI President

Sullivan, now in her first year of the Master of Public Policy program, has the unique opportunity to improve the campus experience for more than 19,000 Cal Poly students in a variety of roles.

As a member of her campaign team, it was truly an honor to help Sullivan achieve such a lofty goal. Now that she is at the halfway point in her presidency, I see an engaged, humble leader who can listen to any student concern and stand up to the California State University board of trustees. She balances a strong work ethic and dedication with the ambition to be the best student, person and friend that she can be.

I recently had the chance to talk to Sullivan as she reflected on the past eight months.

It is currently winter break. Do you go a day without doing something as ASI president?
No. Even if it is just checking my email or thinking of ways to achieve my goals as we start the New Year, I am working or thinking about work nearly every day of break. That said, taking breaks are critical to productivity, so I have had to learn how to unplug every once in a while.

What are some key issues you have been working on?
Although a good amount of my time was spent lobbying for student involvement in the establishment of fees on CSU campuses, I also spent considerable time working on a very successful voter registration drive for the November elections. We are also working on an extensive master plan process for ASI-managed facilities.

What is the most rewarding part of being ASI president?
One of the most rewarding parts of this position is the opportunity to convey sincere gratitude and other heartfelt messages to wide audiences, from sending an encouraging message to students or spending a few minutes in front of the entire faculty and staff thanking them for their work.

What is it like to be in the MPP program and handle the responsibilities of ASI president?Challenging. Many times, it seems as if there is not enough time in the day to accomplish all of my responsibilities. I am the first president in quite a while to be a graduate student while serving, and I can certainly see why. It takes significant time management skills and likely, very little sleep.

How did the faculty in the Political Science Department support you during your bid for president?
They supported me in a litany of ways. I knew I could always go to them for helpful advice, but there were also times when they gave me the emotional support to keep me going. Whether it was a good word in class or just a few encouraging words when I was in the department, knowing I had their support meant the world to me.

If you could change one thing from these past eight months, what would it be?
I would have kept a journal, beginning in February 2014 of the campaign. I have had so many experiences and learned so many lessons, and I need to keep better track. I want to look back on my time as ASI president and remember every detail of the highs and the lows of this year. I plan on remedying this come January.

What are you most looking forward to in the upcoming year?
During the campaign, I had an idea of what I thought would be good for Cal Poly, but I did not come in with a detailed agenda. The first few months have been a huge learning curve, and I’ve been working on various issues that fell into my lap. I am most excited to intentionally spend time on the things I have discovered are most in need of improvement for the betterment of Cal Poly students. 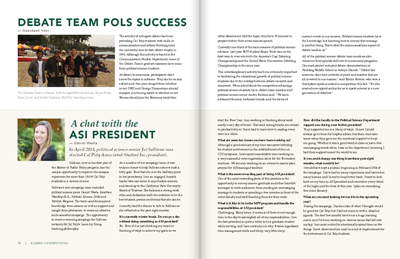