This fall, the Political Science Department welcomed Laura Hosman to its faculty. Officially an assistant professor of ethics, public policy, science and technology, she brings with her a wealth of international experience and Learn by Doing opportunities for Cal Poly students.

Hosman’s professional life, which includes work abroad, research and teaching, is at the nexus of public policy, technology and international development. “It’s actually most fun when your research and teaching can coincide,” she said. “Bringing technology into international development is definitely where my heart is.” (Notably, she has given a TED Talk on the subject.)

Currently teaching Technology and Public Policy, among other courses, she will also help lead the new Science, Technology and Society minors offered through the College of Liberal Arts starting in summer 2015.

Hosman’s professional life, which includes work
abroad, research and teaching, is at the nexus
of public policy, technology and
international development.

It was during her five years at the Illinois Institute of Technology (IIT) that her love for international development grew into a professional project. As she and her partners confronted the problems involved with technology and development, their work bloomed into the PISCES project, currently operating in Micronesia, which attempts to bring technology-based solutions to teachers and schools that often are without electricity.

Hosman hopes to further integrate her development work with her research and teaching in the future, a sure benefit for Cal Poly, the department, and Learn by Doing. Through her courses, she’s “hoping to bring students of many disciplines together.”

As she did at IIT, Hosman wants to tap the student body for project-based learning, possibly abroad. “My favorite thing is to work with students on this stuff and to get them to see what it’s like in these remote places,” she said. “It’s the most effective way to learn about yourself and the world.”

Her current research interests involve experiential learning among students and the often understated role of electricity in development. One of her studies, research on hardware challenges in development, was commissioned by the United States Agency for International Development (USAID).

Hosman’s international experience includes work in Haiti and Micronesia, and her education has taken her around the world. A post-graduate Fulbright Fellowship at the University of Amsterdam for International Relations was followed by time spent at the Venice International University. Then she studied at USC, where she earned a doctorate in political economy and public policy. Before accepting a position at IIT, she was a postdoctoral fellow at UC Berkeley doing “grant-funded research on innovative technology projects in Sri Lanka, Macedonia and the former Yugoslavia.”

“It was the Learn by Doing ethos that was the strongest pull to Cal Poly,” she explained. “At Cal Poly you can think outside the classroom.” And that is what Hosman intends to do. But the conversation, like her work abroad, always turns back to teaching. What she loves about that work is that if one “scratches the surface, there’s always politics to be found.” 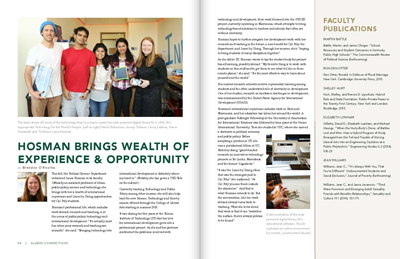