Mock Trial: The Epitome of Learn by Doing

by Alexa Arndt and Ellen Stark

Mock Trial is a national competition held each year in which students argue a fictitious court case against teams from other schools. Students from Cal Poly’s four Mock Trial teams travel up and down the state during fall and winter quarter, sacrificing weekdays and weekends for competition and the goal of advancing to nationals.

Last season, Cal Poly advanced past regionals to Opening Round Championships for the first time in program history, and the group is working hard to maintain and expand upon this progress.

Each August, before school is in session, the Mock Trial season begins with the release of a 100-plus-page packet that consists of a fictional lawsuit or criminal charges, fictional characters, and fictional case law and legal statutes. Each team member fills the role of witness or attorney. Within days students memorize these packets and prepare prosecution and defense theories, themes and witnesses over the course of several weeks.

Faculty advisor Alton is effusive in her praise of Mock Trial students. “These individuals are intelligent, engaged and fun,” she said.

Mock Trial is more than an extracurricular activity; it is the epitome of Learn by Doing. Students are not only exposed to practical legal experience, they are also able to hone their public speaking skills while practicing teamwork and collaboration within a group of their peers.

“In Mock Trial, students learn to think critically, to analyze, to persuade, and to defend a legal position,” Alton said. “They are asked to think, argue and strategize under enormous pressure. They must also remain calm and courteous during the forensic battle. Each of them rose to the challenge.” 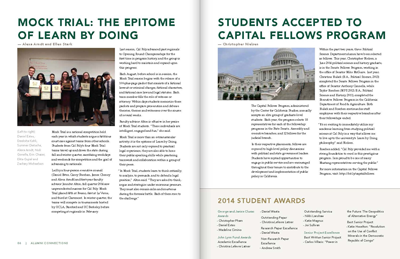