— By Michael Huber and Victoria Tonikian

As part of that team, we worked hand-in-hand with a variety of influencers and professionals involved in state government. From house representatives to lobbyists, our team strived to bring student issues to the forefront of California politics while gaining as much knowledge as we could along the way.

Our project’s team consisted of 15 students, Professor Chris Den Hartog and former 35th District Assembly Member Katcho Achadjian. This flagship project was brought about in large part by Achadjian, who not only approached Cal Poly with the idea but supported our team throughout the year by offering guidance, as well as insight regarding the mechanics of California’s legislature. In addition, our team also worked closely with current 35th District Assembly Member Jordan Cunningham, who along with his staff introduced and advocated for our project’s bill in the assembly. State Sen. Bill Monning supported our bill within the Senate. The language of the bill itself was drafted by our students and is geared toward promoting, as well as protecting, students’ rights by urging textbook companies to increase transparency between textbook editions on their websites. 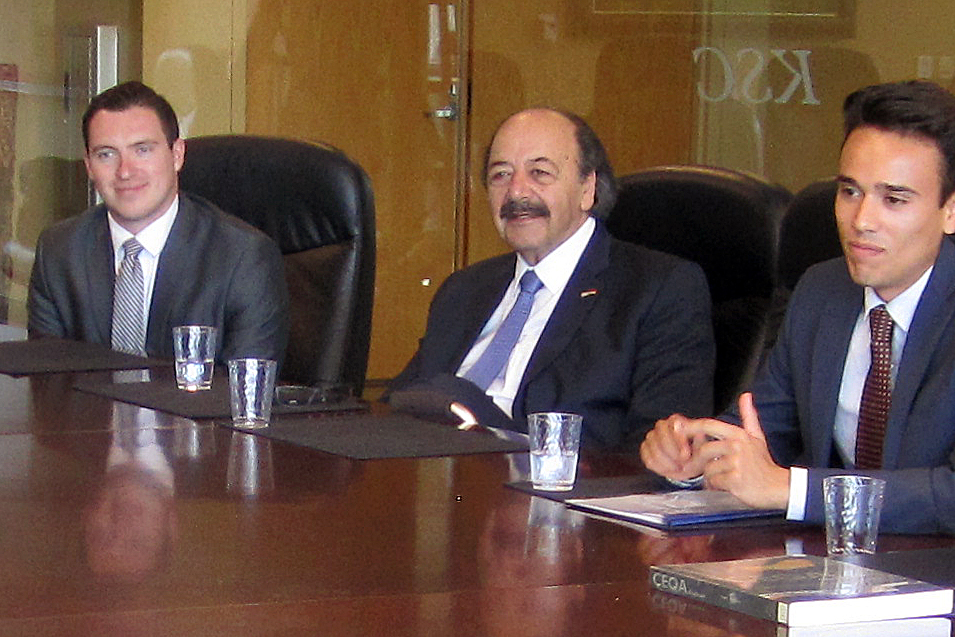 We worked through three distinct cycles throughout the development of the bill, which required our team to tackle different problems. The first cycle involved brainstorming existing issues that students faced, as well as what potential solutions could be implemented to combat these issues through the California legislature. Thus, most of fall quarter focused on various research assignments, as well as in-class collaboration to discern the problems our fellow students face that would be best resolved at the state level. Our team narrowed it down to a handful of problems and, by using a voting system, we chose to focus on textbook transparency. Students in the class felt that this would be an opportune problem to tackle because it impacted students throughout the entire California State University system.

Cycle two involved refining the problem, as well as drafting and testing our potential legislation through mock debates and discussions in addition to gathering feedback from Achadjian and other professionals who regularly attended our meeting times in early winter quarter. Lastly, cycle three involved outreach to the various assembly members involved in the education committee and trip to Sacramento to sponsor the bill. Students individually contacted the state of assembly members who sat on the education committee to schedule meetings to discuss our bill the day before it was to be heard before the education committee. Three students, Lindsay Wallace, Ivana Medina and Chase Dean, offered testimony on AB 2385 on April 24. The bill passed on the Assembly floor on May 10 with a final vote of 71-0, with seven no votes recorded. The bill passed on the Senate Floor 35-0, with four no votes recorded. The bill went back to the Assembly floor for a final vote before being presented to the governor.

Students and alumni meeting up in Sacramento
while advocating for their bill.

Overall, our research covered a variety of subjects, including effectively demonstrating challenges to university students, illustrating ways our bill rectifies these issues at the state level, identifying flaws in our bill’s proposal, uncovering the potential adversaries and obstacles we may face, and figuring out how to draft a bill that improves upon current legislation. The California Bill class has proven to be an interesting endeavor and has offered many insights into the policy making aspects of the California legislature as well as within-group dynamics. Not only has this class exposed our team to some of the work that goes into policy making, but also the troubles one may come across when trying to pass legislation, including pushback from parties affected by the bill and gathering support from like-minded legislators.

Many students believe that this class has been a brilliant experience and a great learning opportunity that exceptionally highlights Cal Poly’s Learn by Doing philosophy. We believe that this class is a wonderful opportunity to allow students to learn and work on creating laws or regulations within our legislature. To continue to expand upon our experiences, grow from our mistakes, and help the next group of students, a few individuals from the pilot class created a manual with tips and tricks for future classes. By doing so, they hope to highlight our experiences and help future teams start with a solid foundation. As the first team for the California Bill Project class, we’re excited to see what future issues will be tackled with this platform that Cal Poly and the Political Science Department have afforded students.