Home : Professor Ning Zhang will give a lecture titled “References, Inferences, and Lifeworlds in Cross-Civilizational Communication between China and the U. S.”

Professor Ning Zhang will give a lecture titled “References, Inferences, and Lifeworlds in Cross-Civilizational Communication between China and the U. S.”

Years ago, when I told my Ph.D. advisor, an internationally renowned American social scientist, that my tooth was aching because I was stressed about finishing up a paper, he responded by emphasizing that he should never be convinced of the causal connection between these two conditions.

Yet “stress induced toothache” is 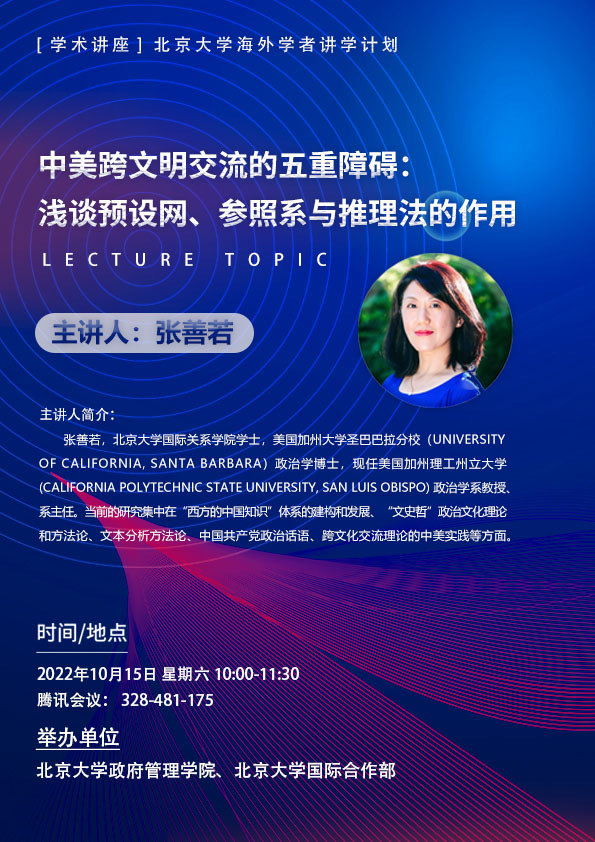 commonly accepted in the popular medical knowledge in present-day China, underpinned by traditional Chinese medicine, as a symptom of a bodily condition conceptualized and named as “being up on fire” (上火).  While the connection between toothache and self-perceived stress may not have been formally and scientifically (defined by Western medical science) proved and perhaps never will be, and even though the usage of “up on fire” in Chinese everyday experiences could acquire a borderline mythic or superstitious undertone, identifying a pattern through repeated observations of the same experience is a widely accepted inferencing method in the Chinese medical knowledge.

As a Chinese-American who was born and raised in China and lived and taught Chinese politics for nearly two decades, communicative situations like this happen all the time.  On the larger scale of things, everyday I witness some kind of miscommunication, misreading and mis-interpretation between China and the United States.  In this talk I share some initial thoughts and conclusions of my research guided by this question.  To put it simply, if you can visualize it, each one of us walks around everyday carrying an invisible “lifeworld” around us, which is “vast web of presuppositions” according to the German social theorist Jurgen Habermas.   Lifeworld operates our reasoning process by “pre-supposing” the validity and truthfulness of some phenomena, incidents, and narratives (and the invalidity and untruthfulness of some others) as well as the rationality, correctness, and rightfulness-to-use of some inferencing licenses (and the irrationality and sinfulness-to-use of some others).  The Chinese and the American have very different lifeworlds with very different references and inference licenses.  Facing the same fact, say, that Covid-19 is a contagious virus that spreads around when people move around, these two cultures and societies, through reasoning processes that they each consider “righteous” and “truthful,” come to very different conclusions, decision and policies.