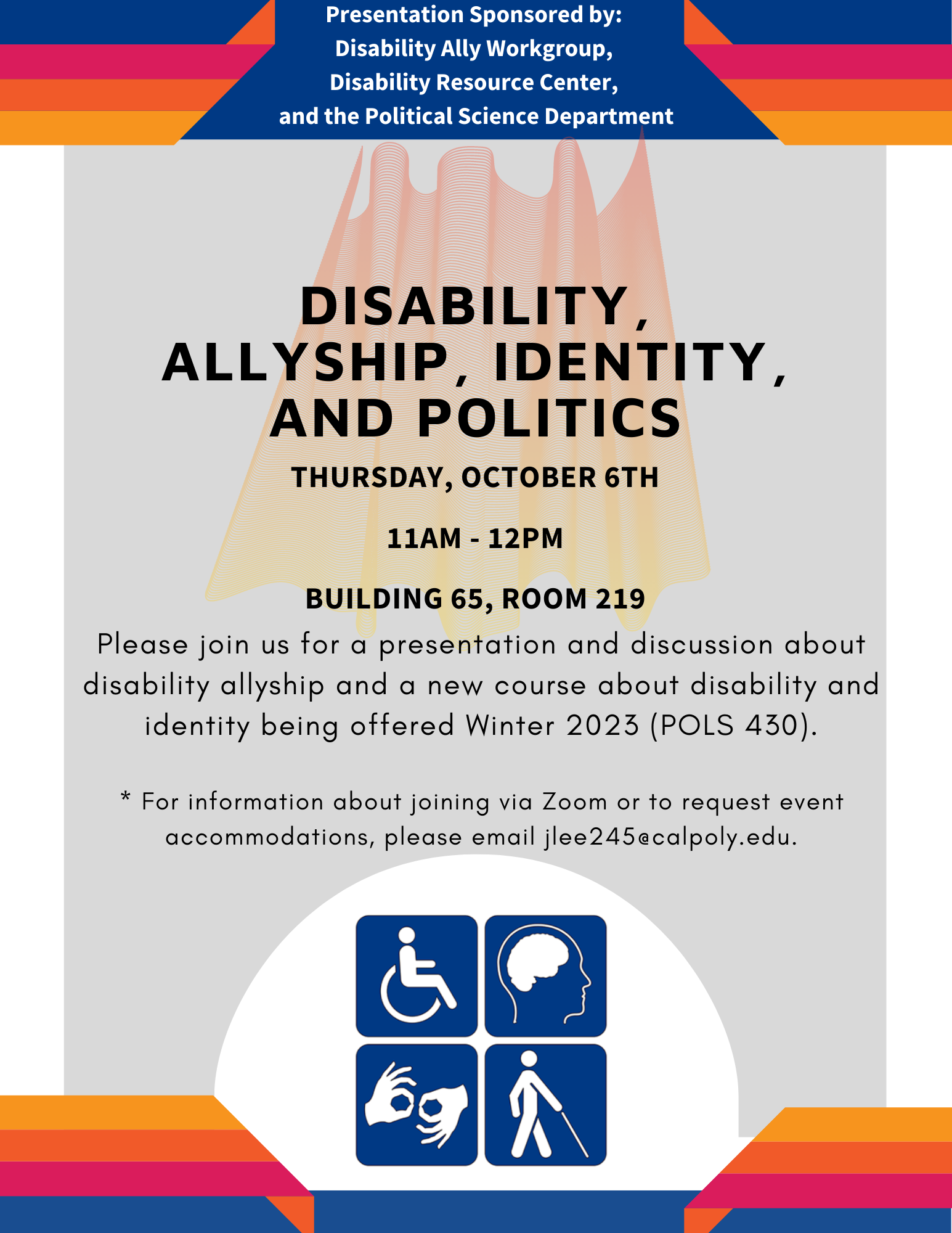 The Cal Poly Political Science Club is back! Join us this quarter in building a network of politically minded students here at Cal Poly! We look forward to a year full of entertaining community building meetings, insightful speakers, and professional development. Our first meeting will be Tuesday, October 25th at 7pm! Going forward, the Political Science Club will be meeting on the fourth Tuesday of every month at 7:00pm. Be sure to sign up for our mailing list for more updates on our upcoming meeting.

This year is the 10th anniversary of Paideia, Cal Poly’s only political science journal! Since 2013, Paideia Journal has published Cal Poly strongest student authored research papers, literature reviews, analyses, and other essays. Our student-run journal provides Cal Poly POLS majors, minors, and MPP students an opportunity to enter the professional world through academic publication. To be considered for our 10th Anniversary Edition, submit your 300-400 level paper from this school year or last school year at the link below!

and find us on LinkedIn at https://www.linkedin.com/company/paideiacalpolyslo/ 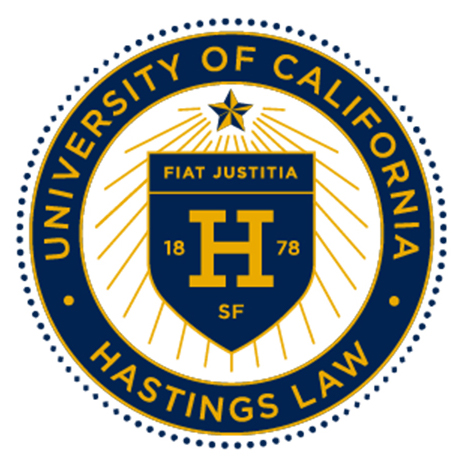 accelerated program through which Political Science students can earn both their Bachelor of Arts and Juris Doctor degrees in six years, rather than the usual seven.

Students participating in the Pre-Law 3+3 B.A./J.D. Concentration will have their first year of law school coursework count towards completing some of the course requirements for their undergraduate degree at Cal Poly.

If you are interested in being considered for the program this year, please send a brief statement of interest in the program to Dr. Jennifer Denbow (jdenbow@calpoly.edu) by October 14, 2022.

Prof. Matthew Moore will be offering a new course in Winter 2023—POLS 430: Disability, Identity and Politics.

The course examines ideas and texts from two social movements: the mainstream disability rights movement, which treats disability as fundamentally a problem of individual rights and discrimination; and the more radical disability justice movement, which sees disability as a central concept in any system of inequality, since such systems necessarily rely on distinguishing between those able or entitled to receive certain rights or benefits and those disabled or not entitled to receive them.  Similarly, some thinkers see disability as being about bodies/minds that are not able to do certain things, while others see it as being fundamentally about the social response to body/mind differences—on this view, the problem isn't that some people can't hear, for instance, but rather that other people wrongly assume that everyone can, and then design social life based on their assumption. As a final example, we will examine the issue of cure: whether people who are disabled need or want to be "cured," and how disability relates to technology and the transhumanist vision of humans being transformed by our relationship with it. The course promises more questions than answers, and becoming comfortable with that is part of what we will critically examine together.

Do you want to get involved in local politics and do more than phonebank? The SLO County Democratic Party (SLOCDP) matches interns to tasks, projects, activities that support their strengths, skills and interests. Interns have created and managed candidates’ social media accounts, trained other Dems, written and published Op-Eds in the Tribune, spoke at Board of Supervisors meetings, organized Voter Registration drives and helped local candidates launch their campaigns. If you have an idea on how to engage young voters, gather data or campaign differently, we’d love to hear and support your work with an internship. We also collaborate with Planned Parenthood because protecting Reproductive Rights and bodily autonomy is political.  Email action@slocdp.org for more information.

The Lamb Prize in Political Science promotes the value of education by supporting and rewarding undergraduate papers that combine innovation and good writing related to policy or politics.

Recipients will receive a non-renewable scholarship: The program will feature original compositions by White and Johnson.

White is a Kansas native who spent several years of his professional career teaching and performing throughout the Midwest. He has been at Cal Poly since 2019. More information about White is on his faculty website. Johnson began playing guitar in his hometown of Chicago when he was 12. His musical roots include blues, gospel, jazz and rhythm and blues. In addition to his hit solo recording projects, he has recorded with vocalists Joe Williams and Vanessa Ruben, saxophonist Richie Cole, among others. He has performed with Nancy Wilson, Marlena Shaw, Angela Bofil, Dizzy Gillespie, Freddie Hubbard, Grover Washington Jr. and other notable artists.

Daugherty, in addition to playing piano, is a conductor, musical director, recording artist, composer and arranger. She is currently touring the U.S. as music director/conductor of “SIX the Musical.” As a solo jazz artist, her most recent jazz trio album, “Bring Joy,” earned a four-star review from Downbeat Magazine and was listed as one of its Best Albums of 2017. She has collaborated with woodwind specialist Victor Goines of the Jazz at Lincoln Center Orchestra and has led and participated in clinics that focus on jazz and making a life as a professional musician.

Black began playing the clarinet when he was 8, and later became interested in upright and electric bass. In 2008, he moved to from Kansas to Los Angeles, where he has worked with a variety of artists, including Kamasi Washington and the West Coast Get Down, Terence Blanchard, Marcus Belgrave, Terrace Martin, Kenny Burrell and the late Solomon Burke. Black continues to record and tour and is working on releasing his debut album this fall.

Taylor studied classical percussion and music education at the University of North Carolina Greensboro, where he earned his bachelor’s and master’s degrees. He spent 10 years working, playing and teaching with world-renowned jazz educator Jamey Aebersold. He has shared the stage with Terell Stafford, Branford Marsalis, Joey Calderazzo, Joe Chambers and others. Taylor is assistant professor at North Carolina Central University. He has written articles for Modern Drummer Magazine and The Music Educators Journal, and he has written a hip hop music appreciation textbook, “Yo’ Check This: Topics in Hip Hop.” 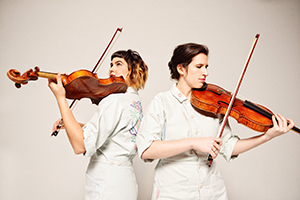 Based in New York City, Bennardo and Levinson first played to an eager crowd on Fire Island in the summer of 2012 and have since commissioned more than 40 works.

Recent highlights include a five-city tour in Sweden performing their Translucent Harmonies program, appearances at the Oh My Ears Festival in Phoenix, and the Re:Sound Festival in Cleveland. The duo has also performed at venues including the Center for New Music in San Francisco, Monk Space in Los Angeles, Scandinavia House and Roulette in New York, Short North Stage in Columbus, Ohio, and Aftershock Theater in Pittsburgh.